The Uttarakhand government has decided to continue the Char Dham Yatra in the hills at the time of winters too.

The government has asked the state tourism department to explore all possibilities for the feasibility of the winter Char Dham Yatra. The decision was taken by the Chief Minister, Harish Rawat after holding a meeting with the priests and members of the temples of the four Dhams- Kedarnath, Badrinath, Gangotri and Yamunotri.

Traditionaly the pilgrimage starts in May and Ends in October/November with the onset of winters. As the Shrines receive heavy snowfall during winters and are inaccessible, the Idols and symbols are moved to nearby Temples which remain open during winters. 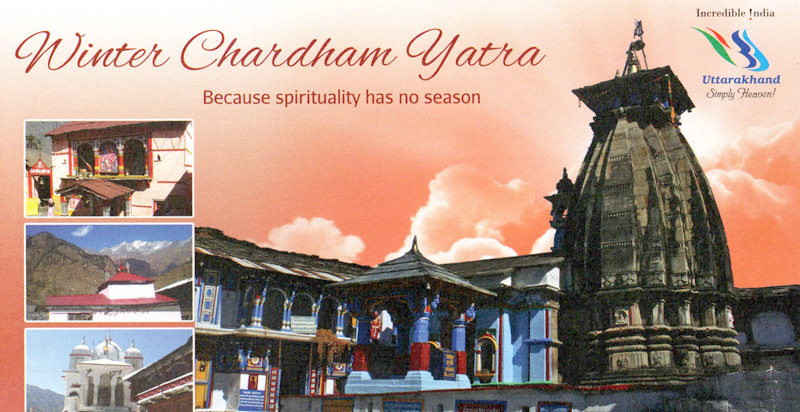 All the Char Dham deities are worshiped at their nearby wintery sojourns namely Ukhimath, Joshimath, Mukhba and Kharsali for the deities of Kedarnath, Badrinath, Gangotri and Yamunotri respectively.  The gates to all these winter Dhams will remain open for devotees making the Char Dham Yatra a year long affair.

Ukhimath: is a small village located before Chopta, is famous as winter seat of Kedarnath Temple. The idol is places in Omkareshwar Temple of Ukhimath, when the Kedarnath Dham is closed due to heavy snowfall.

Joshimath: is the winter seat of Badrinath Temple, where the idol is placed at Vasudev Temple. Joshimath is already popular being the Gateway to Auli, Valley of Flowers, Badrinath and Niti Valley.

Mukhba: is a small village in the town of Harsil, located on the Banks of River Bhagirathi, on the way to the pilgrimage of Gangotri. It popular due to the fact that the idol of Goddess Ganga is brought down to Mukhba from the shrine of Gangotri in the Upper Himalayas and kept here throughout the winters as Gangotri becomes inaccessible due to heavy Snowfall.

Kharsali: is the winter seat of Yamunotri Temple, located at an altitude of 2675 mts above the sea level. Kharsali is a quaint little village in the town of Uttarkashi District. Kharsali also houses the oldest Shani Dev Temple of India; the idol of Goddess Yamuna is kept at the Shani Dev Temple during the winters.

The government and tourism department has decided to promote Winter Char Dham extensively to make up for the loss of tourism during the year.