Kedarnath temple is one of the sacred pilgrimage centre in Northern India, located on the bank of Mandakini river at an altitude of 3584 meters above sea level. The historical name of this region is "Kedar Khand". Kedarnath temple is a part of Char Dhams and Panch Kedar in Uttarakhand and one of the 12 Jyotirlingas of Lord Shiva in India.

Kedarnath is flanked by breathtaking snow-capped peaks, making it the most remote site among all four Char Dham Shrines . But each year the followers of Lord Shiva visit this holy temple. The scenic beauty of Kedarnath town attracts lots of tourists from all over the world. You will find it quite crowded during the summer season (May and June). In the month of April to August thousands of devotees come to visit the Kedarnath Temple. During Winter season , Kedarnath is closed for six month due to Heavy snowfall and Extreme Cold weather. 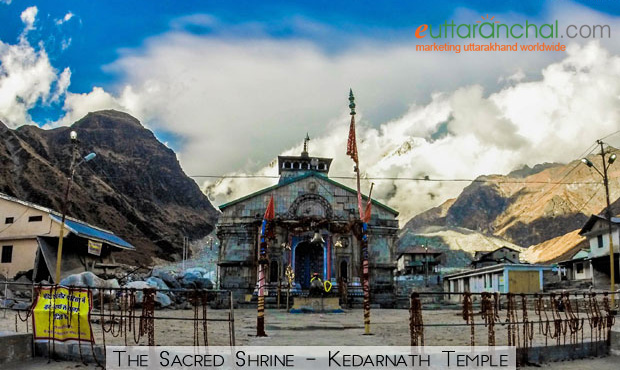 Note: Gaurikund was the last destination on Kedarnath route, but with Kedarnath Floods in 2013 a new trekking route is in process to be constructed. It will be aournd 21 kms of trek, which is either start from Sonprayag or Sitapur. As of now, helicopter is the best way to reach Kedarnath temple.

Note: The Temple of Kedarnath Dham is closed during winters, you can check the closing and opening dates here.

History and Importance of Kedarnath Temple

Renowned temple Kedarnath is dedicated to incarnations of Lord Shiva. Kedarnath is named after King Kedar who ruled in the Satya Yuga. It is believed that Kedarnath Dham is the place where Lord Shiva absolved Pandavas from the sin of killing their own cousins Kauravas in the battle of Kurukshetra war. There is an interesting Story behind the Town and its temple. According to the Puranas, the Pandava brothers did a major penance in Kedarnath to please Lord Shiva.

Earlier there were many accomdation facilities, such as Budget hotels, Ashrams and Guest houses in Kedarnath for tourist stay. Now with recent floods, devotees can only stay in tents or camps.