Gangotri is one of the origin sources of Holy River Ganga (Ganges), and one of the important Char Dham pilgrimage in Hindu Religion. The main origin of the river is “Gaumukh” which is a glacier located 19 km away from gangotri temple. Ganga river is the longest and most sacred river in world.

Gangotri is located at an altitude of 3100 meters above sea level, on the banks of Bhagirathi river. Gangotri is the starting point of Ganga river where the goddess Ganga workshipped by the Pilgrims or Devotees. In Ancient time the river is called Bhagirathi and attains the name Ganga from Devprayag onwards where Bhagirathi meets with Alaknanda form Ganga River. Gangotri is the home place of many ashrams, small shrines and temple. 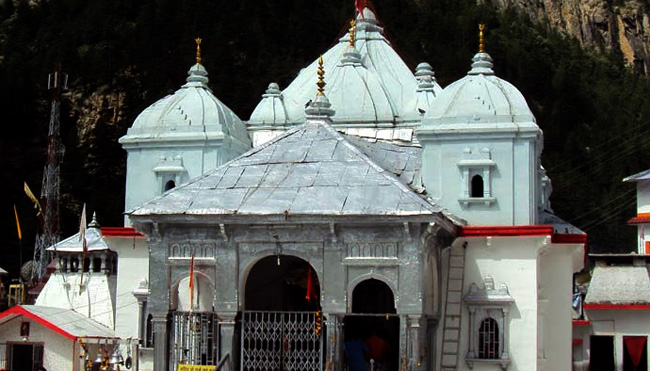 Note: The Temple of Gangotri Dham is closed during winters, you can check the closing and opening dates here.

History and Importance of Gangotri Temple

According to Hindu Mythology, It is said that the Ganga is a result of reward given by lord “Shiva” to the king “Bhagirath” for his penance. However due to her pride and the fact that the earth would be devastated if Ganga came down in her full force, Lord Shiva caught her in his locks. The sacred stone near the temple denotes the place where Ganga first came down to earth. This is why Ganga is also called by the name of Bhagirathi.

The Present temple was constructed by a Gorkha Commander Amar Singh Thapa in the early 18th Century. It is said that at the time of construction of temple Gaumukh Glacier was here but receded to it's present location due to global warming.

There are many Shops which sell prasads and light weight cans to carry water from Gangotri after Darshan .Ganga water is pure and used in poojas or offering in temple. There are Ashrams and few hotels located on the other side of temple for tourists and pilgrims accommodation. Gangorti is the home place of many varieties of flora and fauna. There are several temples in Gangotri where visitors can learn the history behind the creation of Ganga River.